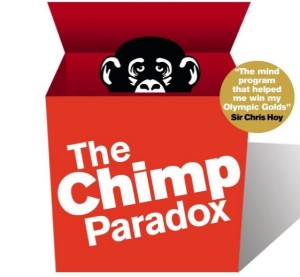 I first picked this book up with trading performance in mind. I’ll be clear though – this isn’t a book explicitly about trading. But the problems traders face are a manifestation of deeper, underlying issues. I have seen many traders fail to reach their potential and instead of looking at themselves, they often look at everything else under the Sun in their constant striving to find the key to their success. Even those who do have the courage don’t often get to the crux of the issue. There’s so much legitimate information out there (not to mention the useless drivel!) that to identify something as potentially life changing as “The Chimp Paradox” is rare. It’s a book about how to manage and live with your inner chimp (read: primitive but powerful emotions and drives) in all walks of life. It’s not complicated, but it could be game changing for those ready to invest in their future. This could just be the missing link – not just for traders, but for everyone.

The author Dr. Steve Peters, is a veteran of clinical psychiatry. He’s worked in the academic world, helped businesses and more recently been plying his trade in the field of performance – pro sports. The man has been credited in the success of top level performers in highly competitive sports such as professional snooker, Olympic cycling, international rugby and Premier League football (or soccer if you like). But as much as success has followed him wherever he’s worked, what Dr. P should really be judged on is what’s in the book!

The book differs from many others which I’ve come across in that it’s a programme. Quoting its full title “The Chimp Paradox – The Mind Management Programme for Confidence, Success and Happiness” might have explained this a little better! It doesn’t cover much in terms of academic theory other than to give a rudimentary outline of the systems involved and the mechanisms by which we form our understanding of life, the universe and everything. What it then does is proceed to break down our “psychological universe”, bring situations to life with examples and then give you exercises to help you deal with issues you might face.

It’s like a roll call of everything that’s important to deal with as a trader. Accountability; dealing with acute stress; destructive beliefs; predicting the future; expectations; habits; decision making; complacency – the list goes on. It does this through the eyes of your rational “human” and through the eyes of your “chimp” which has an entirely different agenda. Recognising who’s in control in this endless dialogue and deciding how you really want to act is critical to all that you do. And whether you’re the Dalai Lama or not, you’ll still have a chimp to deal with at one time or another.

For me, I’ve got a great deal from the book already, but there are perhaps a few things which have been particularly valuable. The first is identifying and deprogramming destructive beliefs. Then there’s gaining a better awareness of chimp-based emotions and behaviours throughout life. Perhaps most importantly is learning how to deal with an angry chimp when it inevitably shows itself. You’re not trying to control your emotions, but by learning to identify and work with your chimp, you stand a far greater chance of having your human decide what your actions will be.

The only criticism I initially had of the book was at times it felt too broad. But having finished the book, I understand that this for a couple of very important reasons. One, there’s a lot to cover as many aspects are quite personal and two, in working with the programme it’s up to you to bring it to life. So if you feel the same way as you’re reading it, just stick with Dr. P!

Dealing with an out of control chimp is something that runs far deeper than simply recognising when it’s in “poop flinging” mode. It’s about working with it on a daily basis and learning its wants and needs, its beliefs and insecurities. Traders are particularly susceptible to losing control of their chimps and the consequences of failing to address this are potentially very expensive. What “The Chimp Paradox” does is provide you with an understanding, framework and method to work with your chimp. Of course, it’s your choice whether you follow the advice or not.

Click to buy The Chimp Paradox on your local Amazon

Don't miss out on the Bookmap up to 50% off SPECIAL OFFER
GET IT NOW!